Out of office hours, in case of emergency 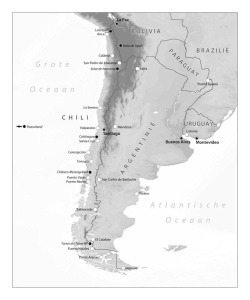 Geography Chile is a narrow but incredibly long, snake-like country of contrasts, from verdant vineyards to driest desert, deep fjords and towering glaciated volcanoes. Chile’s unusual geography features more than 5,000km of South Pacific Ocean coast. The country is almost 4,400km long but barely more than 160km at its widest.

When to travel Chile’s geographic and climatic diversity makes it an ideal country to visit throughout the year. The best time to visit Chile is November to March, when it is spring and summer. The temperatures are the most pleasant and there is little rainfall. Depending on where you want to go, some times are better than others. The Atacama Desert in the north is warm year-round, so you can visit the Atacama at any time. The central region has a temperate climate with distinct seasons, so the best time to visit is during the springtime from September to November, and the autumn from March to May. In Patagonia and the Lake District (from Puerto Varas southwards), the best time to visit is during the summer, from October to March, unless you want to hit the ski slopes - the skiing season is from June-August.

Languages The official language in Chile is Spanish. English is common in large cities. The staff at hotels, restaurants, and guides at tourist locations will speak English well.

Travel documents A valid Dutch passport is needed upon entering Chile. Upon return in your home country the passport should be valid for 6 months more. No long stay visa is needed if your stay in Chile is no longer then three months. For all other nationalities, we advise you to contact the embassy or consulate of Chile. All travelers, including kids at any age need to carry their own international passport. Keep a copy of your passport and other documents in your luggage and keep a digital copy, for instance in your mail. In case you lose your original documents you still have the copies.

Security Chile is a safe travel destination. But in Santiago, pickpocketing is common. Use common sense while traveling in Chile, just as you would in any other location.

• Take the normal precautions to guard against purse snatchers.
• Carry a copy of identification documents. Keep originals and your valuables in the safety deposit box of your hotel and make sure to list down what you deposit and verify the responsibility assumed by the establishment.
• Carry valuables discreetly. Do not carry large amounts of cash. Keep an eye on your bags and luggage.
• Do not carry suitcases, bags or sac packs on your back.
• Do not exchange money out in the street.
• Do not walk around at night through areas with poor lighting or without companion.


Currency and banks Chile's currency is the Chilean peso. Chile has plentiful banks and ATMs in major cities. In Patagonia, south of Puerto Montt, ATM machines are not as common, and credit cards are not as widely accepted, so bring cash. Easter Island and San Pedro de Atacama have ATMs, but sometimes run out of cash.

Transport Travelling in Chile is easy, comfortable and, compared with Europe, inexpensive.

• By air. Chile is a country of almost unimaginable distances, which makes flying by far the quickest and most convenient way of taking in both its northern and southern regions in a single trip.
• By bus. Chile’s long-distance buses offer an excellent service, far better than their European or North American counterparts, thanks mainly to the enormous amount of legroom, frequent departures and flexible itineraries.
• By micros. Local buses, which connect city centers with suburbs and nearby villages.
• By colectivos. Shared taxis operating along a set route with fixed fares, normally only slightly more expensive than local buses.
• By taxis. Normally black with a yellow roof. Foreigners are often overcharged, so check that the meter has been turned on before you start a journey and get an estimate for the fare, if possible in Spanish.
• By car. Most visitors visit Chile for the country’s wilderness areas, which are often difficult, and sometimes impossible, to reach on public transport. But for more independence, your better rent a car.
• By ferry. South of Puerto Montt, where the mainland breaks up into an archipelago, a network of ferries operates through the fjords, inlets and channels of Chile’s far south.
• By train. Chile once possessed a huge network of railways. Now the nitrate days are over, no national railway lines operate north of Santiago, and what lines are left south of the capital are unable to compete with the speed, prices and punctuality offered by buses.


When taking public transport, safeguard valuables by keeping them on your body at all times. Always padlock your bag as this is a huge deterrent for would-be thieves. On longer bus journeys make sure to pack enough water and snacks. Always be alert at bus terminals or bus stops for pickpockets and bag snatchers.

Electricity The voltage in Chile is 220V. Sockets require plugs with three round pins in a line (with the middle one being an earth). Two-pronged European style plugs can also be used. However, we advise you to bring a power plug and/or voltage adapter.

Mobile phones These have meanwhile become standard in Chile. Coverage is mainly limited to the big cities and along the Panamericana. If you bring a compatible (GSM only) cell phone to Chile, it will only work if your provider offers roaming. Chili uses GSM 1900 frequency, so check, if your cell phone supports this one (older European phones don't).

Health & Vaccinations Seek for medical advice before travelling to Chile from your local health practitioner and ensure that you receive all of the appropriate vaccinations. As a guide tetanus, diphtheria, polio, typhoid, hepatitis A (for stays over 4 weeks) and hepatitis B (for stays over 3 months) are recommended.

Although the tap water in Chile's larger cities is generally considered safe to drink it has a high mineral content that can cause stomach upsets so it's safer to drink bottled water. If you're travelling outside of the major cities you definitely should not drink the tap water. Take a small first-aid kit along with you which includes iodine, plasters, sterilon and anti-fever, diarrhea, constipation, insect bites, sunburn and possibly a cure for motion sickness. Consider also a tick, thermometer (unbreakable), ORS (Oral Rehydration Salts, from dehydration) and vitamin tablets. Hygiene traveling including a bottle disinfectant gel (to wash your hands without the need for water and soap) and disinfecting wipes. If you go to a malaria area, think of anti-malaria tablets, an ointment containing DEET and an impregnated mosquito net.

Clothes Chile has a great diversity of natural landscapes, from fantastic mountain peaks to towering glaciers and ice fields to one of the driest deserts in the world. This country is also home to all four seasons. As a result, Chile can be a tricky country to pack for as the contents of your suitcase will largely depend on your itinerary and the season. The key to packing for a country with such wide-ranging temperatures is: LAYERS. Invest in a base layer made out of a good, sturdy and moisture wicking fabric (like merino wool). Then add a mid-layer, which can include a fleece jacket, sweater or in colder climates a down/core loft jacket. Lastly, finish the outfit with a waterproof shell.

Shopping If you're shopping in Chile, most large stores have fixed prices but in smaller shops and markets you should barter. Popular items to purchase are blankets, wool rugs (choapinos), cashmere jumpers, earthenware pottery, lapis lazuli gem stones and fine Chilean wine.

Back in Holland we want to thank you for your excellent service during our stay in Lima and Puerto Maldonado.
Everything was in order and the transfers were correct and in time: even when our flight (from Puerto Maldonado via Cusco to Lima) had a delay of many hours caused by bad weather.
We can and will recommaned you to our friends.

Paul
The Netherlands
Why SATS Peru?

Very good service in general. Everything is wel organised and friendly staff. Thank you very much.