Out of office hours, in case of emergency

You are here: Home / Shop / Brazil

Brazil is the largest country in South America and fifth largest in the world. Colonized by Portugal in the 16th century, Brazil’s culture is a blend of Portuguese, Native American, European and African influences. This makes Brazil one of the most versatile, fascinating and colorful countries of Latin America, which offers a wonderful mix of exuberant nature, culture and beaches. In the capital Brasilia, the second largest city of Rio de Janeiro and the metropolis Sao Paulo you will enjoy the bustling life of the many nightclubs, bars and restaurants, theater, dance and music shows, sport events and beach life on the Copacabana. This vast country offers a wide variety of natural treasures, such as the Pantanal, the largest wetland in the world, the Amazon, the largest rainforest on earth and the Iguaçu Falls, largest complex of waterfalls in South America. 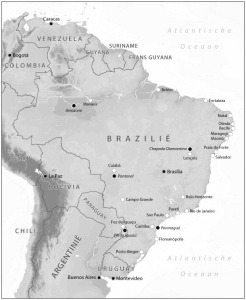 Geography Brazil has a fascinating geography. Home of the Amazon Rainforest, as well as the Brazilian Highlands and vast stretches of coastline; Brazil has a total surface area of 8.500.000 km2. Brazil is the fifth largest country in the world and occupies almost half of the entire South American continent. The coastline stretches for 7491 km and continues to be a major tourist attraction for the country. The shore is made up of mangroves, lagoons, dunes and spectacular coral reefs.

When to travel The best time to visit Brazil is from April to June, and August to October. Deciding on the best time to visit Brazil depends a lot on where you are going. In Rio de Janeiro conditions during the winter time (May to September) are like those of a north European summer. It is more like a north European autumn in São Paulo and the southern states and it can get very cold in the far south. The heaviest rain is from November to March in Rio and São Paulo, and from April to August around Recife. The rainy season in the north and Amazônia can begin in December and is heaviest from March to May. Summer time conditions all over the country are tropical, although temperatures rarely reach 40°C. The average annual temperature increases steadily from south to north.

Languages The official language of Brazil is Portugese, but English and Spanish are usually spoken in touristic areas.

Travel documents A valid Dutch passport is needed upon entering Brazil. Upon return in your home country the passport should be valid for 6 months more. No long stay visa is needed if your stay in Brazil is no longer then three months. For all other nationalities, we advise you to contact the embassy or consulate of Brazil. All travelers, including kids at any age need to carry their own international passport. Keep a copy of your passport and other documents in your luggage and keep a digital copy, for instance in your mail. In case you lose your original documents you still have the copies.

Security Brazil has a reputation as a rather dangerous place, and it’s not entirely undeserved. You should be vigilant, particularly before and during the festive and carnival periods. Use common sense while traveling in Brazil, just as you would in any other location. • Carry a copy of identification documents. Keep originals and your valuables in the safety deposit box of your hotel and make sure to list down what you deposit and verify the responsibility assumed by the establishment. • Carry valuables discreetly. Do not carry large amounts of cash. Keep an eye on your bags and luggage. • Do not carry suitcases, bags or sac packs on your back. • Do not exchange money out in the street. • Do not walk around at night through areas with poor lighting or without companion.

Currency and banks The official currency in Brazil is the Real. US Dollars are the most widely accepted. Exchange facilities are available at airports, banks or bureau de changes and it's advisable to request bank notes in smaller denominations, as there is often a lack of small change. ATMs are available in all large towns and cities, although there can sometimes problems withdrawing money. The most accepted credit cards in Brazil are Visa, Diners and American Express (Mastercard is not common). A combination of cash and cards is best.

Transport • Bus. Jumping on a local bus is one of the best ways to get to know a city. Local bus services tend to be decent. Public transport is likely to be disrupted during periods of unrest. Be vigilant when using public transport, especially during rush-hour as petty crime is common. • Road travel. Brazil has a high road accident rate. In many rural areas the quality of roads away from the main highways is poor, and standards of driving, especially trucks and buses, is low. • Air travel. Always use recognized national air carriers. There have been accidents involving light aircraft, which sometimes have poor maintenance standards. • Taxi’s. Only use licensed taxis. You can pick up a licensed taxi from the many recognized taxi ranks around Brazilian cities. • Rail travel. Both Rio and São Paulo have excellent metro systems. The rail infrastructure is limited. • Sea travel. Be wary of safety procedures on board vessels. Boat accidents on the Amazon River are not uncommon.

When taking public transport, safeguard valuables by keeping them on your body at all times. Always padlock your bag as this is a huge deterrent for would-be thieves. On longer bus journeys make sure to pack enough water and snacks. Always be alert at bus terminals or bus stops for pickpockets and bag snatchers.

Electricity The voltage in Brazil is not fixed and it can be either 110V or 220V. The type of plug required is either a US style flat 2 pin plug or a European round 2 pin plug. We advise you to bring a power plug and/or voltage adapter.

Mobile phones If you bring a compatible (GSM only) cell phone to Brazil, it will only work if your provider offers roaming. Brazil uses GSM 850 MHz, 900 MHz, 1800 MHz and 1900 MHz frequency, so check, if your cell phone supports this one (older European phones don't).

Health & Vaccinations Seek for medical advice before travelling to Brazil from your local health practitioner and ensure that you receive all of the appropriate vaccinations. As a guide tetanus, diphtheria, polio, typhoid, hepatitis A (for stays over 4 weeks) and hepatitis B (for stays over 3 months) are recommended. The tap water in Brazil is not safe to drink, so only drink bottled water and it's wise to avoid ice cubes in drinks and salads which may have been washed in unhygienic water. Take a small first-aid kit along with you which includes iodine, plasters, sterilon and anti-fever, diarrhea, constipation, insect bites, sunburn and possibly a cure for motion sickness. Consider also a tick, thermometer (unbreakable), ORS (Oral Rehydration Salts, from dehydration) and vitamin tablets. Hygiene traveling including a bottle disinfectant gel (to wash your hands without the need for water and soap) and disinfecting wipes. If you go to a malaria area, think of anti-malaria tablets, an ointment containing DEET and an impregnated mosquito net.

Clothes If you plan to travel in different regions of Brazil, you should pack beachwear, light clothes, light warm clothes, thermal underwear and a winter coat! In Rio or the coastal areas during Brazilian Spring, summer, or fall, you will need only casual warm weather clothes. It is pretty warm and humid in Brazil in the summer. Shorts, jeans, t-shirts, and sports shirts are all common. In the winter, you might want to throw in a light sweater or jacket if you get cold. Also, side trips to the mountains can be cooler at any time of year. Pack a sport coat, slacks, and dress shoes if you plan to visit some of the upscale night spots or restaurants. People only wear ties and suits for business occasions and weddings.

Shopping Brazil is a great place to shop for diamonds and emeralds, gold and silver jewelry and leather goods including coats, bags and shoes. If you're looking for the latest fashion, glamorous Rio is the place to shop for cutting edge clothing and swimwear. Popular souvenirs to take home include ceramics, soapstone carvings and wooden ornaments. It's customary to barter in Brazil, except in upmarket shops which have fixed prices.

Back in Holland we want to thank you for your excellent service during our stay in Lima and Puerto Maldonado.
Everything was in order and the transfers were correct and in time: even when our flight (from Puerto Maldonado via Cusco to Lima) had a delay of many hours caused by bad weather.
We can and will recommaned you to our friends.

Paul
The Netherlands
Why SATS Peru?